During my vacation I started to think about how I make games and I noticed that there’s often a pattern. I looked back at older projects and saw where the majority of them “died” or got placed on a shelf. It was when I needed to find an art style, for some reason every project gets boring during that stage and as I always try new ideas it’s easy to move on to a new idea. Now that I’m more aware of this problem I might be able to prepare better for when I reach that stage.

I’ve made games since 2009 so I’ve been through a lot of different projects with various team sizes and deadlines but I’m going to speak from a “hobbyist” perspective since that’s where my mind has been the past years. So working on a project outside of a day job, no economical time pressure (more emotional pressure but that’s another topic).

I’m a very gameplay oriented developer so I believe that my ideas can be tested really quickly. Every game WhyKev has released followed this formula, after the first 4 hours you should be able to get a feeling if the idea would work. Be able to play a little and see the potential. It’s a great way to see if it’s worth it to keep dreaming about strange ideas or if moving on is best because some ideas work and some don’t. I use Twitter a lot for talking about my games and sometimes even more to share my dumb ideas that I try. It’s at least a great way to see if people understand it and to hear people’s thoughts. 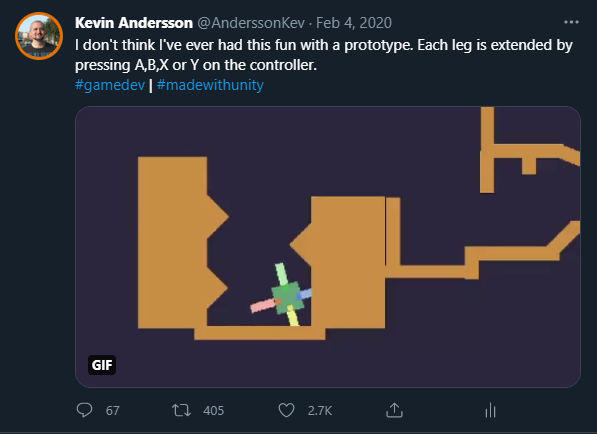 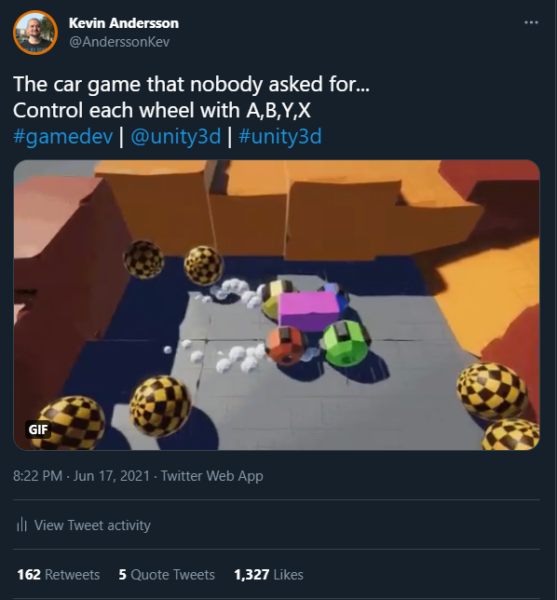 One Month Of Ideas

So when a tweet does well and I believe in it I will then enter the next phase which is the “expand one month” where I’ll just try to think of every thinkable idea for the game. No idea is dumb enough, the risk here is promising too much. I live stream the development over on Twitch and run the risk of saying too much (I’m working on getting better with this). In this phase I keep adding some of these ideas that I come up with and test the water on Twitter and sometimes Reddit.

So after a few weeks of this I get to the point where I want to find the art style for the game. The reason I want to find an art style that I can work with early is because I know how to finish a game and I can imagine how the end product will feel if I finish all of my ideas, but I don’t know how it will look. So when I’ve reached a point where I’ve got a look that I like, I usually just create one small area that could fit within a gif so I can show others how I imagine it. I’m often reaching for the moment where I can say “imagine this but more”.

You’ve probably heard about a vertical slice when speaking about game development, if not then imagine that the finished game is a cake with layers that represent everything you can do in the game as a player. Then a vertical slice in this context is if you grab a piece of the cake so you get a small piece of everything that represents the final product. Example: starting the game will show logos, menu, settings and a few levels. Localization and console preparation is also a plus to start early in this stage.

As I mentioned before, the goal is to always have a playable version of the game. I do this for multiple reasons. Not only for myself so it feels like a real game but also if I need to send it to anyone (friend, publisher, content creators or competitions). I think doing it this way will make the player more confident in the game as well during development. 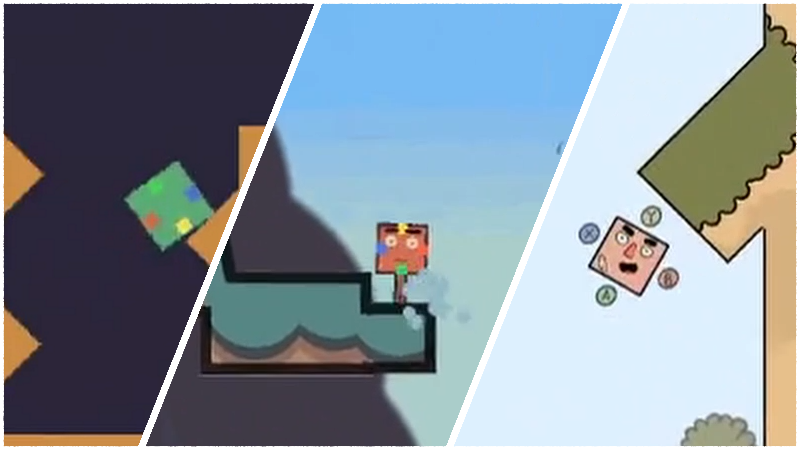 So now the idea is fun, the art style is in place and I can start the game with a menu that loads some levels. From here I can spend one week to clean up the project a bit and plan the game to get a rough estimate when it will be finished. It’s easier to estimate when I know that the foundation for all systems are in place and can be built upon.

Things that I keep in mind here are:
– Will the game be finished before October?
(Because a lot of bigger games comes out between October – December)
– People might’ve bought games during the holidays so releasing early in January might not be the best.
– Since my games often have unlockables and are divided into “chapters” I can always wait with the majority of unlocks until later and adjust based on how much time I’ve got left. Or even scale down/up chapters based on time.
– Can some of the content be a future free update?

I am a big fan of planning projects and planning in general, when I started WhyKev I planned 2 years ahead just because I thought it was fun. But now in the projects phase we’ve got a game that we can test easily and there’s a plan for what to do. I guess from the first 4 hours prototype to this point it’s been about 6 weeks (this can vary based on how long it takes to find the art style). A project usually goes through different stages “Concept/Idea”, “Pre-Production”, “Production”, “Release” and for some games it’s also “Post-Release” and now we’re entering the production phase.

During production I try to actually have the game ready 3-4 weeks before release so I can be certain that there are no bugs when I release the game, so I can relax and enjoy the moment of seeing people play it. So far it’s been working really well with my estimates for my own projects (TaniNani and Hoplegs Early Access).

In general I try to have my projects scalable to fit whatever is going on, do I need to release earlier for some reason or is the game a hit and need more content?
I hope that this was at least a bit interesting to read how I think about my current way of creating games. If you decide to try this approach then don’t follow exactly my timeline unless you really want to, there’s no pressure to get a prototype running in 4 hours. Let me know if you have any questions or some feedback!

Posted in News
Scroll To Top